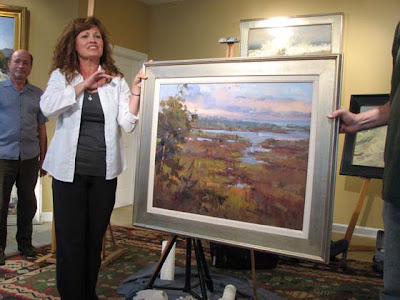 Cindy Baron with Marsh Landscape - painted with her artist friend Jerry Brown, standing at the right, at the Walls Gallery in Wilmington, NC.


Hi Readers and Friends,
Just a quick note to explain my absence and lack of posting recently. My dear husband woke me up at 4:00 am Sunday morning and calmly suggested I take him to the hospital. First, he is not a complainer, so I knew something was seriously wrong. Inquiring, I found him clammy and he reported pressure and pain in his chest. The classic symptom of the pain starting down his left arm was also present.

We quickly sped off to the ER and were greeted by ready personnel in abundance who immediately did an EKG. After that, the cardiologist appeared and took a look at the report. The next fast step was to the cath lab where they unclogged a major artery that was completely occluded. Long story short, my husband felt immediate relief, but the Dr. informed him that two more arteries are 90% occluded also. Today he is having another catheter procedure to work on those.

My sweetie is a type A personality, but won't admit it. In fact, I think he may give me a heart attack with his quick approaches to situations and his energy level that never seems to slow. I like to take my time and think things over. He shoots from the hip and gets lots more done. He sleeps five to six hours a night. I need eight or more. Anyway, we are definitely in the assessment phase at the moment. The prognosis is good and we hope he'll be back up and running in a few weeks, though hopefully just a little more slowly. Turns out he has a genetic predisposition to this clogged artery, heart problem. His grandfather died of a heart attack and his uncle has had by-pass surgery. Were it not for the terrific advances in heart medical care, my husband would not be here. I have to say his care has been wonderful and the doctor who took this on is stellar!

Just a few days prior to this incident we drove to Wilmington, NC to visit with some friends. The husband there, who is older than we are, has just gone through heart surgery recently and had a pace maker put in place just ten days before we arrived. Happy to report he is doing pretty well, thankfully. But...his wife, my friend, had procured tickets to an artist demo at the Walls Gallery while we were there. This turned out to be a great lot of fun for me!

The art demo was done by two artists, Cindy Baron and Jerry Brown..both of whom are plein air landscape artists. The painting above is their demo painting which they accomplished in just an hour and forty-five minutes. Amazing. They are good friends to each other and actually painted this landscape together on the same canvas while answering questions from the audience. They were very entertaining in their approach to the piece. The most amazing thing to me was that they only brought pencil sketches with them and neither of them had any color reference to the scene as they painted. I honestly don't think I could ever do that in a million years. It was well worth the time to watch them both and I have to say, their paintings displayed at the gallery were very very good! And I thank my friend for arranging to see that demo.

So I came back inspired, but covered up with what has been chaos around here lately. The exterior of the house is finally painted. Spring is requiring yard and garden work. Moths attacked my pantry which needed painting, also, so just before the heart attack crisis I had started that project. So now I've spent several days in between visits to the hospital taking everything out of there, cleaning and moth proofing the whole thing, painting the interior of that. Not quite through, but getting there. I'm headed back up to the hospital in a little while for this next procedure of unclogging arteries.

So now you know some of what has been going on around here. I hope my studio time will be restored sometime soon. Crazy heart attack days.....!! Stay tuned!
Posted by Cheryl Pass at 5/04/2011 2 comments: