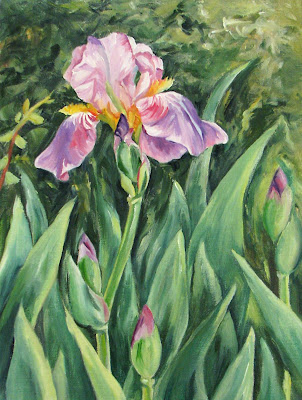 This was the first Iris to burst forth in my garden this week..and as you can see, there are more coming! Happy Spring!
I was thinking about how formal Irises are and wondering why I think so. While painting this one I realized the reason. They have padded shoulders with epaulets, all dressed up for a military parade!! They seem so elegant, don't they?

This was a very complicated composition. There are many areas of different textures and a thousand shades of green. The flower itself is full of nuances and challenges of light filtering through with soft lines and areas that are graduated from purple to pink to white. Then there was the boxwood background with the saber-like spears of the Iris leaves in front. Tricky.
Posted by Cheryl Pass at 4/25/2008 No comments:

Confessions of a Color Obsessed Artist 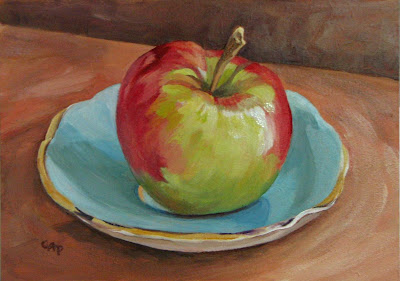 I have a confession to make. I have been obsessed with a color again. It's an elusive color, or maybe I should say it's a variation of a color with nuances, subtle yet so enticing it has had me looking for it everywhere. I first saw it at a designer showhouse about four years ago. A decorator had painted a bedroom in this color and then hinted at it in other areas of the room with linens. I almost swooned. Then I saw it a couple of years later in a painting by Julian Merrow Smith. It was a tea cup tucked into the upper corner of the painting. He also used the saucer in a couple of other paintings and, again, I found myself coveting that color. It was the perfect compliment to it's opposite. So the search has been on. I've looked everywhere for just that cup and saucer, or something more or less like it....a pottery bowl, a ceramic anything, fabric, anything, everywhere. Couldn't find it ....and then a couple of weeks ago I was shopping at one of my favorite antique venues and, out of the "blue," there it was. The very cup and saucer I had been seeking. And blue it is. But it isn't. It's between the sea and the sky, between aqua and heaven somewhere. I've always loved blue. I have collections of blue and white china pieces that I have gathered over the years. But those are the deeper indigo / ultra-marine blue. In printing this is called "reflex blue." Simple, like ink. But the coveted blue I sought and found is somewhere else. It's Caribbean blue maybe, like the water you see in those commercials for cruise lines, the blue that makes you swoon and crave a trip to the ocean in some tropical paradise. 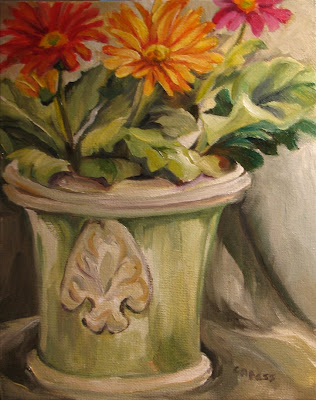 
First attempt at a plein air painting....which usually would not be a still life, but this was a demonstration at an outdoor event. Kind of a long story...but mostly this was due to arm twisting by one of my art guild friends named Scott Boyle. He is a veteran plein air painter and he came to the event all geared up for two people to paint. He had the two pochades, the paints, brushes, canvas, turps, the pot of flowers,all of it. I have never painted outdoors before, but I admire Scott quite a bit, so when he asked me to pitch in I felt privileged to paint along side of him. It was fun for me to give this a try, not my usual controlled environment and painstaking detailed effort. More like painting on the fly.
Well, here is what I ended up with and I hope you will like it! Thank you, Scott!! 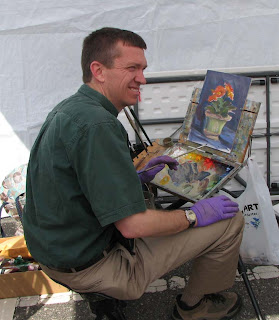 Scott working on his version of the Gerber Daisies.
Posted by Cheryl Pass at 4/19/2008 No comments: 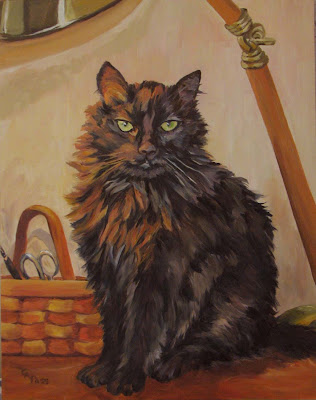 You can click on the pictures and get a larger view.

My son and family will be visiting soon. This is their cat, Speedo, and the photo reference for this painting was taken by my son. I wanted to get it done before they visit in order to give it to them. Speedo, according to my son, is a rascal. He has clawed the furniture and wakes them up at all the wee hours to go scavenging outdoors. To be fair to Speedo, he was a feral cat picked up by the pound and that is where my son found him. In other words, Speedo has a checkered past and learned to fend for himself at an early age.

I could have named this painting, "Halloween Cat," (Halloween in April?) due to the black and orange color palette. By the way, Speedo is all black. The light from the lamp shed a reddish gold color onto his fur and made such a statement in the photo. I am finished with this one....and on to the next.
Posted by Cheryl Pass at 4/17/2008 2 comments: 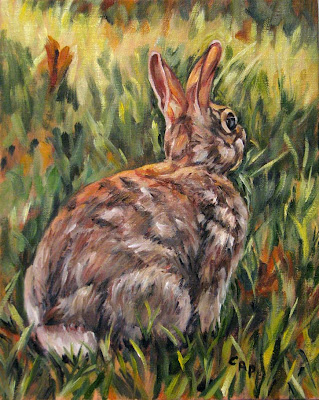 You may click on the picture to view a larger image.


I really had a lot of fun doing this one. Sometimes it just all comes together... and this one did. Usually that is the case when a painting has been lurking around in my mind for quite a while and then, when I get after it on canvas, it seems like all of my thoughts of it just come to life. I don't mean to be too mushy over a common backyard rabbit, but ....well....I just get so silly over any of our little critters who visit our yard.
Posted by Cheryl Pass at 4/09/2008 3 comments:

Daily Painting, "All Ears" In Progress 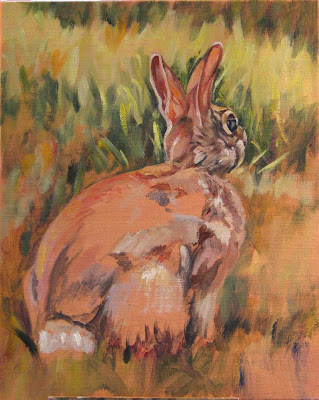 "All Ears" In Progress
10X8
Oil on Canvas Panel

It must be spring!!! This little fellow is a backyard visitor I managed to capture with my camera. He gives our dog, Bosley, a merry chase every once in a while....gratefully he gets away. In this pose you can see how alert he is, ears up in all directions! How could I resist painting him?
Posted by Cheryl Pass at 4/08/2008 No comments: 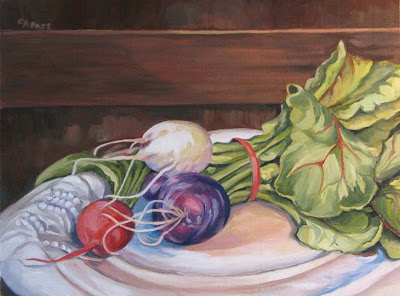 Please click on either picture for a larger view.


To re-cap, I bought these beautiful radishes from a very lovely young farmer's wife at the local Farmer's Market last year with every intention of painting them. (as opposed to eating them...artist's do that....buy food just for painting it, silly us!!) Well, as usual, life gets in the way of spontaneous explosions of painting, and I ended up setting them up in a still life so I could get to them even if they collapsed from age. Sure enough, it has taken me many months, but here they are!!! Worth the wait and fun to paint!!

The farmer's wife told me they were called "Easter Egg Radishes" for their size, shapes and colors. I had never heard of this before, but I do think they are gorgeous. I did throw in the smaller red one for bright contrast. 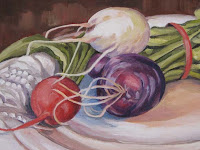 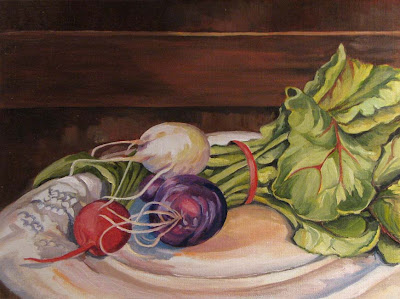 Getting there...the little roots coming off of them all over the place have been a bit tricky to do. There is a bit more to be done on the plate on the left and nearest foreground, but then it will be finished. Next time!!!
Posted by Cheryl Pass at 4/04/2008 No comments: 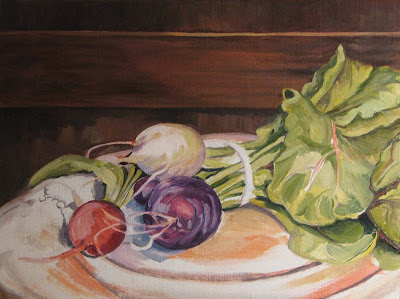 
Sorry to be jumping around like this, from signs, to the cat, back to the radishes...but today is the first time I've had in a few weeks to actually devote some hours to my painting. I knew when I bought these radishes they were going to be a painting and fun to paint as well. Still hoping I can pull it off! Only time now to wash my brushes and go to bed....but tomorrow is another day and I'll be back at them.
Stay tuned....
Posted by Cheryl Pass at 4/04/2008 No comments: 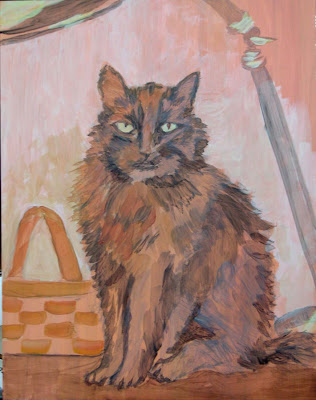 I don't normally do this much underpainting, but I have only had time to use some acrylics lately, so I just am trying to get some values and correct placement so far on this one. I am going to have to adjust from the photo to get rid of some ghost shadows, too. The fun part is that, on this very black cat, the light from the lamp on the left of Speedo is gold and the light on the right of him is light blue/grey.
Posted by Cheryl Pass at 4/02/2008 2 comments: