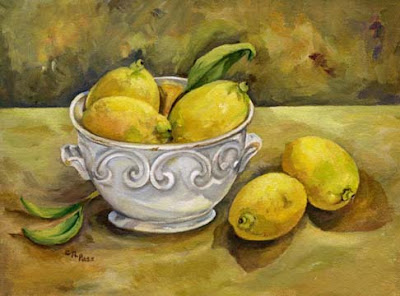 Sometimes life just throws lemons at you and you have to take the time to make lemonade with them before you can get back to your normal life. Such is the last few months at our house. In March I had surgery and came through that just fine after a few weeks of healing. Then came the first week of May. In the last post I described the heart attack that my husband gratefully survived that week. He was gradually getting back on his feet for the first four weeks when all of a sudden, on a Friday morning, he began suffering stabbing pain in his chest and abdomen. Thinking it was another heart event, we called 911 and got him to the hospital right away. After getting there, the diagnosis was not so clear. The cardio people said it was not a heart problem. The search was on for the cause while he still was suffering terrible pain. First they thought it was a gall bladder attack. Tests proved that to be wrong. Then, on Saturday, after 30 hours of this constant pain, they decided to take a look at his appendix. Sure enough...they decided this was the problem. Preparation was being made to get him into surgery when the appendix ruptured and then the pain, which was bad, became excruciating. This begat a race to the surgery where they first tried the laproscopic procedure and discovered they could not excise the problem that way. So, the surgeon went in with the full cut from his navel to his groin and thereby, did the deed. All well and good, but the repercussions from this made for a miserable week in the hospital and the following week at home was no picnic, either. Finally, here we are with nearly a month gone and he is finally able to drive and start gradually back to work. He lost 15 lbs. and is now back to eating more normally to try to gain some weight back. You can imagine that having a heart attack and an appendicitis attack all within 5 weeks of each other is a bit much for a good man to take.

In the midst of this, my son and his family, who can rarely visit us because he is career Air Force, descended for their pre-planned visit of 10 days, while in transit from Alabama to Washington DC. I hardly count this as a lemon, frankly, but they have four children ages: 6,4,2, and 2 months. They were some help with things around the house, so I am grateful they came and loved seeing them. There is never a bad time to have the opportunity to be with them...no matter how bad things are. This meant, though, that I was managing activities, meals, and beds, besides trying to have some quality time with the children...all the while trying to see to it that my husband was healing and getting enough rest and care from the appendicitis debacle. Throw in a couple of dogs, some furniture moving, non-stop washing of clothes and bedding, reading of stories, a couple of watercolor painting classes with the 6 yr. old, yard work and play, many trips to the grocery, a lot of cooking and dishes, and more. Should I use the word "circus?" It really was wonderful to see them, in spite of the constant activity. They have gone on their way to DC now and the house is quiet once again.

Needless to say, my paints, brushes, and easels have been sitting there neglected with no artist working in my studio. Hardly a thought of a painting has been able to penetrate my cluttered mind this past two months. All I could think of was getting the everyday necessities taken care of with some sort of sense of organization. Chaos is not my choice of status, so keeping calm and collected to some degree was the best I could do.

Here we are...survived so far. Now I'm gathering my thoughts on how to get back to painting. When you haven't picked up a paint brush in over two months, it feels a bit strange. It may take some warming up and fits and starts to get back in a groove. We'll see what happens...
Posted by Cheryl Pass at 6/29/2011

Good grief! Cheryl! I am so sorry to hear about your husband's trials. Wow! Thankfully it sounds like he is on the mend. Your tales of those chaotic 5 + weels really make me blush when I think of my own life.

I suppose when I was younger, angst played a role in sparking my creativity. Nowadays, I need a little more "space" in my psyche (and a lot more rest in my body! LOL!) in order to create and really be productive artistically.

Therefore, I hope you will find some time now to take care of yourself!! Once you can do that, I think the painting will flow again. In the meantime, know that your brushes will be there waiting for you, at the ready for your artistry, when you are of a mind to tackle them again.

Sending lots of good thoughts of health and creativity to you and your husband!

Thanks bunches Jennifer! I hope you are right..I am still feeling so distracted. Little by little I can feel the painting urges coming, but I'm fighting tired and need time to focus. I'll just have to see if it comes back...hopefully soon!